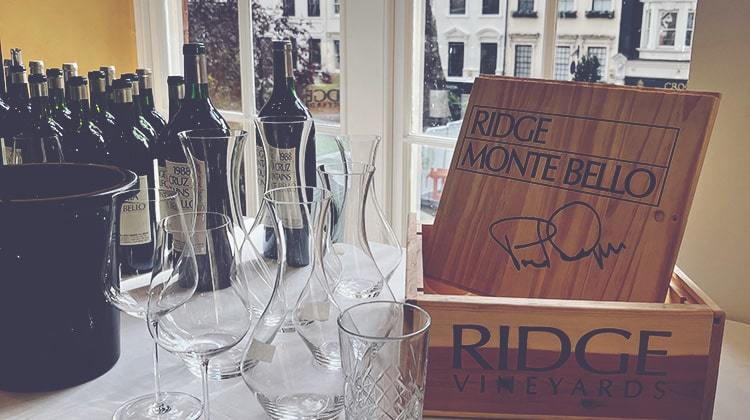 Last week on Tuesday 25th October, I entered the office door with the fantastic news I was to be sent to the 60th anniversary wine tasting of Ridge Vineyards that day in London; I gave a look to the invitation, and I saw the vertical of vintages I would have taste in a few hours' time and it blew my mind!

If I think about Ridge Montebello I also think about the history behind the wine; it’s one of the oldest wineries of the “new world” winemaking scene and everything started in the late 1800 where Mr. Perrone planted some vines on his newly acquired piece of land on the top of Monte Bello Ridge, in Santa Cruz in California, building up his own winery.

In the 1950s the theologian William Short bought the property and replanted some Cabernet Sauvignon; only few years later four friends from the Stanford University decided to take over the winery and made the first barrel of wine which was among California’s finest wines! New owners Dave Bennion, Hew Crane, Charlie Rosen and Howard Ziedler – with the help of an upstart young winemaker named Paul Draper – definitely started the history of one of the greatest wines from USA.

Going back to the tasting: I entered the Ray Dolby Rooms at Bafta in Piccadilly and the Sommelier team was still setting up the room, opening and decanting magnums and regular bottles. This huge square table was prepared to host wine critics, wine traders and sommeliers from across the country to taste vintages of Ridge Montebello from the latest 2019 release to the 1964 vintage! The room filled up with guests and in the meantime I had the pleasure to have a few words with David Gates (Senior VP of Vineyards operation) and John Olney (Head Winemaker & Chief Operating Officer) who were so excited to taste all these vintages with us; even for them that collection of incredible wines was rare to see all together.

Briefly talking about the winemaking, Ridge become organic in 2011 but since the very beginning the winery always tried to avoid “industrial” winemaking and actually used the minimal-intervention approach to improve the character and quality of the wines. The grapes are fermented using native yeasts, and the colour, flavour and tannins are extracted without using commercial enzymes or nutrients and after a few tastings the juice goes in American or French new or air-dried oak casks.

The vineyards of Ridge are planted with Cabernet Sauvignon, Merlot, Petit Verdot and Cabernet Franc which are used to make The Ridge Montebello; further north, Zinfandel, Carignan, Petite Sirah, Mourvedre and Alicante Bouschet are used to make Lytton Springs from Dry Creek Valley and Geyserville from Alexander Valley. From Dry Creek Valley comes the East Bench Zinfandel as well, of which I had the pleasure to try the new 2020. Some Chardonnay is also planted in Santa Cruz Mountains, and we drunk the 2020 and 2018 during lunch.

The tasting was divided into two flights, which totally made sense when we ended up tasting them and comparing the vintages together. Flight one flavours were more hearty and leafy and flight two instead was predominantly fruity and spicy.

Overall, I would love to share how surprised I was to taste all these incredible vintages together. To be able to have a clear vision of what a decade of age can show in a bottle of Ridge Montebello, is a unique experience. I found myself agreeing with others in the room that in certain aspects, the 1997 for instance, tasted younger than the 2007. Even if the 2007 was sensational, my conclusion on the 1997 is that it was the finest of all the vintages I tasted: still a young nose full of fresh red fruits, peppers, vanilla, liquorice and black olives. Incredible palate, very fine tannins, acidity and endless freshness. The 1995 surprised me: it was tight in flavours to the nose and palate, compared to the 1996 from the second flight that instead was totally approachable and incredibly good to drink now in the glass with infinite flavours on the nose as blow torched peppers, wood, spices and still some cooked raspberry and red fruit. Someone in the room commented on the performance of the Cab Sauvignon in the two vintages 1995 and 1996 in Bordeaux where today we are facing a 1996 vintage ready to drink and a 1995 still close and shy to open up as it should. Given the relatively limited performance of the vintage, I didn’t expect too much from the 2005 other than a clean nose and palate, reflecting the vintage that gave finesse to the wine. I gave an incredibly high score with quite a few exclamation points to the 2001 (56% Cab Sauvignon, 36% Merlot, 8% Petit Verdot) with the tertiary nose well integrated, grass and green leaves but with the red fresh fruits on the nose that were still quite vibrant. I found the 2009 and 1999 funny to compare once again: the older wine didn’t feel it was 10 years further aged! Fresh red fruits, peppers leaf, liquorice and a hint of burned wood stick for the 2009, the 1999 nose instead was oriented more on green leaves, grass and fresh chopped green peppers, due to the 25% of Merlot, I believe, with a vivid fresh palate. The 2019 showed a big red cherry, raspberry and vanilla characteristics, the palate is rich with a long finish, well integrated tannins and balanced alcohol and acidity. The 1985 (93% Cab Sauvignon and 7% Merlot) was poured from magnum and the dried fruits nose such as dried apricots, dates and liquorice stick was predominant following a very smooth and delicate palate and a very interesting long and fresh finish. 1977 (97% Cab Sauvignon and 3% Merlot) started with a pleasant albeit slightly ‘horsey’ nose followed by dried fruits and black olives. The palate reflected the nose with hints of floral and mineral characters that kept the freshness of the wine alive.

Starting with the youngest of “Flight Two”, 2018 and 2016 both show an incredible concentration of red and black cherry, raspberry and strawberry, vanilla and liquorice flavours. The 2016 palate is evolving and opening a little bit more but both vintages are reflecting the great vintages they come from. I will be very curious to try the 2014 in a few years' time because I found it very shy on the nose but quite complex on the palate: red fruits, vanilla and a toasty wood, a hint of ash and all very integrated with acidity and tannins. The 1994 was a bomb of plum jam, liquorice and olives with a fresh and quite long finish. If below I said the 1997 was the finest I tasted, the 1996 was the one I would open anytime any day right now; the evolving nose of this vintage was endless, from fruits to floral, to greens and wood, spice and ash. The palate was a harmony of freshness and fruits that lasted into a long finish. A few words on the 2006: at the beginning it was shy and tight and after a few minutes opened up itself very well. It showed strongly with a powerful sweetly fruited nose and an incredible balanced palate. The 2008 (72% Cab Sauvignon, 28% Merlot) was one of the youngest that I would consider ready to open and drink now… fine fruits and well-integrated oak on the nose and a very balanced palate. The 1998 was poured from magnums, the dry fruits and mushroom notes were lovely and likewise the palate showed incredible freshness, vivid tertiary aromas and smooth tannins. A blessing to drink right now even if it might not be to the palate of everyone! The latest vintage and also one of the oldest that the winery owns is the 1964. This was opened right before the somms poured it into the glass and we were delighted with a small amount each - because not all the bottles were in great condition. The main flavour I loved the most here was the “end of burned wood/fire” smell I found very interesting, black olive, dried fruits, dried meat and a mineral hint on the nose. Tannins were very gentle, almost completely disappeared, still fresh and with a smoky finish.

After this incredible tasting, the experience didn’t finish there. The tasting room turned in a dining room in a few minutes while we were drinking some bubbles and having canapes.

During the lunch, we were served the 2020 and 2018 Chardonnay; both still very young and rich in flavours of tropical fruits, minerality and vanilla on the taste. 2012 Geyserville was served side by side with the 2012 Lytton Spring and 2012 Ridge Montebello. Three completely different wines in style and taste, of course: Geyserville has this cooked cherry nose that was incredibly good, while Lytton Springs was a little bit more spicy, with orange zest and cloves. The Montebello had a classic red pepper nose, green leaves and cooked raspberry; nice and long finish.

The final cherry on the cake was when they poured the 2014 Ridge Geyserville Essence: only few of us were aware of the production and how delicious this wine is!!! 51% Zinfandel and 49% Petite Sirah, bottled in 375ml only, it is produced only in a few vintages where the climatic condition is ideal to produce the Essence. The grapes must reach the extreme ripeness for the fermentation to stop at the point of natural stability which allows the wine to hold the residual sugar. The residual sugar of the wine is 15.6%. Nose was very concentrated on red cooked, jammy fruits and the taste was endless! I would like to have it with a cherry tart on the table and I could be the happiest on the planet.

This amazing tasting and lunch ended and my exclamation on my return to the office was “the greatest wine tasting experience so far!” Last but not least a huge thanks to Alex Hunt who was guiding us through the tasting and Peter Lowe for his help and invitation.