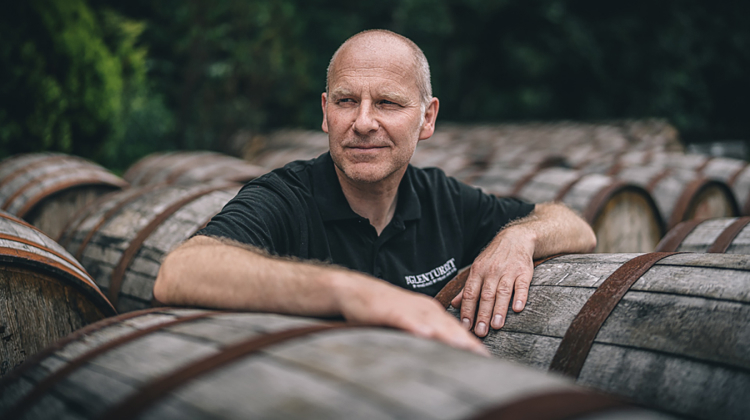 Scotland's Oldest Working Distillery, The Glenturret has been at the heart of Scotland's whisky country for over 250 years. The award-winning distillery is run by Distillery Manager, Ian Renwick who was recently awarded runner up and 'Highly Commended' Distillery Manager of the Year in Whisky Magazine's Icons of Whisky Awards. We sat down with Ian and had a chat about what happens behind the scenes at The Glenturret and what he feels makes this stalwart distillery so special.

What is the history of The Glenturret?

The history dates back to 1763 when a document relating to Sir Patrick Murray of Ochtertyre makes reference to Thurot Distillery, the earliest known name for Glenturret.

In 1814, the Murray family sold Thurot Distillery to Thomas MacInnes, who renamed it The Hosh Distillery. (It remained The Hosh until 1873, when The Glenturret name was reinstated for good.)

By the late 19th century, two more brothers were at the helm of The Glenturret. David and William Mitchell were Scots-born whisky merchants with global ambitions.

The Mitchell brothers passed the business on to their respective sons, who ran the distillery as a family business until the challenging times of the 1920s and by 1923, production at The Glenturret had stopped.

In 1957, James Fairlie purchased The Glenturret Distillery, which had been silent for over 30 years. He sought to bring back the magic of the past, and reinstated the original distilling equipment. Fairlie subsequently led the distillery for over 20 years as both Director and Master Distiller.

In March 2019, The Glenturret Distillery was purchased by a joint venture led by The Lalique Group, a French luxury lifestyle company.

In September 2020, after more than 250 years of distilling, The Glenturret embarked on the next stage of its journey with a completely new range crafted by the highly respected Whisky Maker, Bob Dalgarno.

It's what we call the Trinity, the three touchstones that define The Glenturret and underpin everything we do. First our extraordinary Provenance, we are Scotland's Oldest Working Distillery established in 1763, next our whisky-making Prowess built upon the skills and expertise of handcrafted distilling, our usually slow fermentation and resolute commitment to small batch production. Finally, our passion for the traditions of distilling, an unwavering delight in every step of the whisky-making journey and desire to bring whisky lovers moments to treasure in spirit and glass.

What was your journey to becoming The Glenturret Distillery Manager and what do you enjoy most about your role?

I left school at the age of 16 and served my time as a welder/engineer. The small local company I worked for carried out most of the engineering requirement at the distillery. Glenturret was a very different place back then but the people were just as open and friendly as they still are today. When an opening for two stillmen came up, I didn't hesitate to apply. The fact that I had installed or repaired half the pipework and equipment in the distillery for 10 years previous, played to my advantage. I started work in the washhouse on 4th March 1996, under the supervision of Hugh Malloy. Over the next 20 years I worked for Edrington, carrying out many tasks & projects. I was promoted to team leader. I re-trained as an SQA assessor and as an internal auditor for the companies ISO certification, covering H & S, quality, and food safety. I often carried out these duties at Glenrothes, Tamdhu, Glengoyne, Macallan, as well as other sites within Edrington but my heart was always at Glenturret. In 2017, the long standing manager Neil Cameron retired. Neil was a real gentleman and was a fantastic manager. I had worked very closely with Neil for many years and it was difficult to see him go. I was appointed interim manager, with the position turning permanent following a gruelling interview.

What I enjoy most:

That's an easy answer. It's the variety and the amazing people I work with and meet every day. Working in the distillery, maybe running the stills, helping in the warehouse or carrying out a racking of mature whisky with the team… it is the best place to be.

Which expression is your favourite and why?

The Triple Wood is a really well-balanced whisky, very easy to drink and I always have a bottling open on my shelf. The 12 Years Old is more complex, more full bodied and rich, a fantastic whisky. But, it's the 10 Peat Smoked that really works for me. The sweetness of the new make spirit comes through on the pallet with chimney smoke to follow. It's not just the flavours and aromas that I like. I feel I have grown with this whisky. I was part of the team which re-introduced peated whisky to Glenturret in 2009 and have part of it ever since.

What is your favourite moment/place to enjoy The Glenturret?

There is a little island on a loch in the middle of Scotland, which I visit 2 or 3 times a year with a few close friends (before Covid of course...!). Once we have set up our tents, we light a fire and enjoy a few drams under the stars. It doesn’t get any better than that...!