A Trip to Rioja: Celebrating the launch of CVNE Imperial Gran Reserva 2016 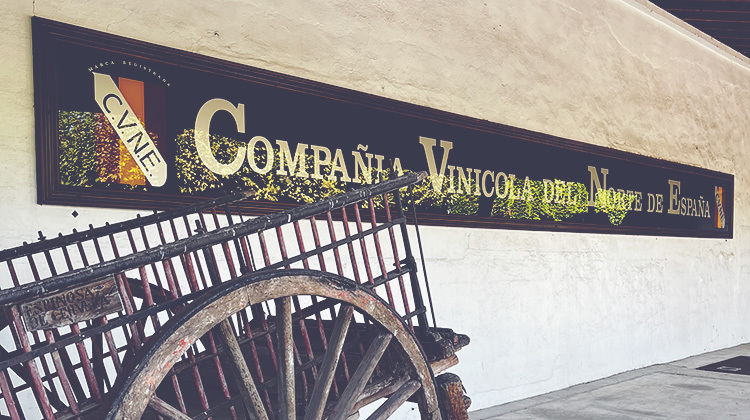 To coincide with the launch of CVNE Imperial Gran Reserva 2016, I was lucky enough to be invited, along with a team of other fine wine merchants, by CVNE and their UK agent Hatch Mansfield to spend a few days in Rioja in the cellars and vineyards of CVNE. We packed a lot into this very memorable 3-day trip, so I have tried to summarise all the wines drunk and places visited as best as possible…

The rather eye-stingingly early Sunday morning start at Gatwick was soon forgotten since by 1pm we were being greeted by Victor and Carlos from CVNE at the famous Cune winery in Haro (home of Imperial Gran Reserva) and by around 1.05pm, we had a glass in hand and were being seated for lunch in what we didn’t know at the time was the first of many lovely dining locations of the trip.

Given the aforementioned early start, and the 30-degree heat, I think we were all quite delighted to hear this was a white wine focussed lunch – predominantly on the utterly delicious CVNE Monopole whites. We first drank the Monopole Classico white from magnum, both the 2019 and 2014 – both so delicious, clearly age-worthy, and as I was pleased to be reminded, ridiculously good value for money. We then went on to taste the Monopole Gran Reservas which is vinified in the same way as the Classico, albeit in much smaller production due to the yield of the vineyard, but then aged for 5 years in wood barrels and botas (giving the wine a slightly sherried style).

Finally, to our disbelief, we were given the opportunity to taste a wine that Carlos (who has been with CVNE for 6 years) had yet to taste and is Spain’s oldest white wine – Corona Gran Reserva 1939. At the end of the Spanish Civil War in 1939, for obvious reasons, there was a distinct lack of field workers to do the harvest work so the priority was harvesting the red grapes; so when the white grapes came to be picked they had dried up to some extent and were affected by noble rot. The wine is said to have aged for about 30 years in cask before it was rediscovered and bottled. It was such a delicious accident that the team at CVNE have set about creating Corona Gran Reservas in suitable vintages.

Given that was just lunch number 1, I was beginning to get an idea that this would be some trip. After lunch Victor gave us a tour of the winery, followed by a vertical Imperial Gran Reserva tasting in the cellars. The primary focus here was the 2016 as it was just due to be released in the UK, but alongside it we tasted the 2015, 2014, 2012, 2011 and 1995. The praise was unanimous for the 2016 in being up there with one of the greatest vintages for Imperial GR.

After a quick turnaround at the hotel in Logrono, we were gearing up for what I’d been told was the ultimate tapas, or pintxos, crawl. As most of the bars are small, we split up into groups to ensure we all got a good taste for the Basque pintxos culture. We re-joined the rest of the group at an infamous Logrono Karaoke bar whose reputation I was already familiar with since it had become such a key feature of the last CVNE/Hatch merchant trip. Fortunately we were afforded an, albeit very small, lie in on Monday morning…

With our focus still on Imperial, we headed to the Imperial vineyards in Rioja Alta which, off the back of the tasting, gave us a great sense of place and terroir. We were then fortunate enough to be shown the latest addition to CVNE’s holdings, the Davalillo Castle, which dates back to the XIII century. It has over the years fallen into disrepair so it is the aim of the CVNE family to restore it and (much to our delight) to include a tasting room at the top which has spectacular views over the vineyards and river Ebro.


And if merely just visiting this castle and taking in some of the breath-taking views wasn’t enough, we had another rather idyllic lunch setting just beneath the castle on-top of the hill. The focus of this lunch was to move away, although not far, from Rioja and taste the wines from CVNE’s new Valdeorras project in Galicia: a particular favourite here was the Regueirón white made from 100% Godello which is an indigenous grape of the region, along with Mencia for the reds.

After lunch it was back toward Logrono to the Vina Real wineries in Rioja Alavesa. The winery was built in 2004 and is of truly staggering scale - the whole process takes place here from receiving the grapes to dispatching bottled wines. We were able to see the harvest in full swing here and get a feel for the scale of the operation. The vast cellars at Vina Real were possibly even more staggering, and a brilliant place to taste a vertical flight of Vina Real starting with 2016 (a knockout wine here too) and finishing with 1981.

Following a fabulous final dinner, and, unsurprisingly (or surprisingly?), more karaoke in Logrono, we were up early for our last morning of the trip to head to Contino which is CVNE’s single vineyard property. Its wines are made exclusively from the vines planted on its 62 hectares all of which are on the bend of the river Ebro in the Rioja Alavesa region. The vineyards here are absolutely stunning, and we were given a tour around by their head winemaker, Jorge. We were able to see harvest in action here too, albeit on a smaller scale than at Vina Real. This was followed by a rather extensive tasting, starting with Contino Blanco, of which I have long been a fan. In 2017 they changed the style of the wine to have much more mineral freshness from ageing in used barrels and concrete vats rather than the richer style of previous years where it was aged in new oak. Following this we tasted their single grape variety iterations: Mazuelo (also known as Carignan), Garnacha and Graciano.

It was then onto the Contino Gran Reservas 2016, 2014 and 2011 which are probably the truest form of ‘Rioja’ produced at the winery and are produced from the best soils of the Contino vineyard. Finally, It was onto what is probably known as Contino’s ‘flagship’ wine: Vina del Olivo which aims to be the maximum terroir expression rather than a maximum ageing expression, hence why it is not labelled as Reserva or Gran Reserva so they are not hamstrung to ageing rules. We tasted the 2019, 2018, 2016 and 2011 – all of which were pure elegance with lovely aromatics, minerality and a real sense of the vineyard terroir.

Just before thoughts could begin to turn to boarding a plane back to the rain in London, it was time for one more lunch in the final perfect dining location: under the trees in the Contino vineyards. Here we drank Contino Blanco, Mazuelo and Vina del Olivo 2011 and 2005 from magnum, ate copious amounts of croquetas and reflected on what had been a truly wonderful trip with generous hosts, new friends, delicious food, perfect weather, and of course copious amounts of sublime Rioja.