Four recipes that are simply perfect with Château Coutet 2016 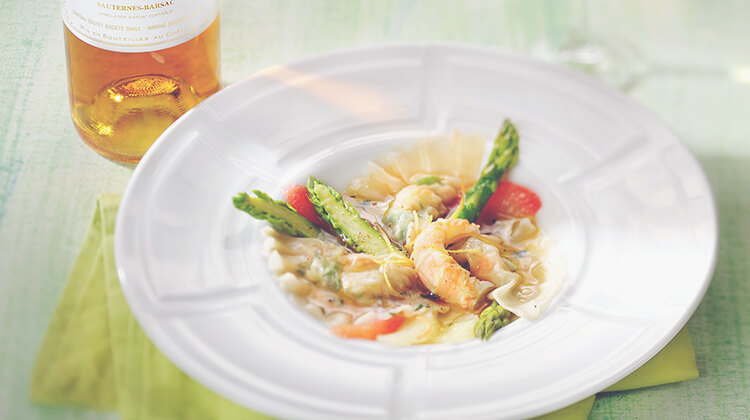 The habit of serving Sauternes at the end of the meal comes from the English custom rather than the French, not forgetting of course that the English presence in Bordeaux was very strong for a long time. However, it is incredible how well this golden wine pairs with all manner of savoury food. Don’t be afraid to venture beyond the confines of puddings and the cheeseboard. Why not try Coutet’s own recipe for:

A splash of olive oil

To make the Sauternes sauce:

A few drops of lime juice and a little zest

1 egg yolk to stick the sides of the ravioli together

Preparation:
Peel the grapefruit and remove the thin membrane from each segment.

Boil the asparagus for 2 minutes and then plunge them into icy water to keep the green color and stop them from cooking more.

Reserve the tips and cut them in half.

Mix the langoustine tails with a little olive oil, salt and pepper.

Make a purée with the asparagus tails and put this inside the ravioli with the langoustine tails.

Salt and pepper the mixture. Close the edges using a little of the egg yolk.

To make the Sauternes sauce:

Gently cook the finely chopped shallots in a little butter for 5 minutes.

Deglaze with the Sauternes, the juice and lime zest.

Cook until the Sauternes has reduced by ¾

Add some of the langoustine tails’ cooking juice or the fish stock and the single cream. Add a little salt and pepper.

Cook until the sauce reduces to a creamy consistency and check for seasoning.

Cook the ravioli in a good quantity of salted water on medium high heat for 3 minutes.

Strain the ravioli and put onto warm plates.

Re-heat the asparagus tips and add them to the dish as well as some nice fleshy pieces of grapefruit. Serve immediately.

1. Peel and core the pears and slice them finely lengthways.

2. Place them on a serving platter then divide the gorgonzola around and scatter with walnuts and hazelnuts.

3. Mix together the lemon juice, honey and olive oil to create an emulsion. Season to taste.

4. Drizzle the dressing around the plate and serve immediately.

This recipe was specially created by Alex Yandell

A handful of fresh mixed herbs

1. Preheat your oven to 200°C, and ensure that your turkey is at room temperature. Pat the skin dry with kitchen towel, then place it on your largest oven tray, and pour 2 cups of water or stock into the base of the tray.

2. Mix together the chopped tarragon and sage with the butter then make an incision between the skin and breast of the turkey and stuff it with the butter.

3. Place 1 lemon, cut into quarters, and the handful of fresh herbs into the cavity of the bird, with a generous pinch of sea salt and black pepper.

5. Place the turkey in the oven, and immediately turn the heat down to 180°C. Cover the turkey loosely with foil after 20 minutes. 40 minutes before you estimate the turkey to be cooked, remove it from the oven and cover it all over with half of the glaze. Return the bird to the oven with out foil covering for 20 minutes, then repeat a second time with the remaining glaze. Allow to cook until the juices run clear (precise time depends upon the size of your turkey) and the glaze is golden.

6. Remove the turkey from the oven and allow to rest on a carving board at room temperature for at least 30 minutes before serving.

7. Meanwhile, coat the apple pieces in sugar and pan fry them in butter over a medium-high heat. Turn them after 3-4 minutes and cook until both sides are golden.

8. Drain all of the juices from the turkey into the tray by tipping the bird. Skim off as much fat as possible using a spoon, then return the pan to a high heat. Stir in the flour and allow to cook for one minute, before whisking in the cider and 2 cups of stock. Allow to boil down until reduced to your liking then stir in the caramelised apples to heat through and remove from the heat.

9. Carve and serve the turkey with the caramelised apples and gravy.

This recipe was specially created by Alex Yandell

Preparation for the soufflés:

1. Preheat the oven to 350° F (176° C). Position a rack in the center of the oven. Grease the sides and bottoms of 8 (4-ounce) ramekins with butter or cooking spray. Place them in a large baking dish. Have a large pot of boiling water ready.
2. Melt the butter in a medium saucepan over medium heat. Add the flour and whisk with the butter until the mixture is thick and golden brown. While whisking, add the milk in a slow stream to avoid lumps. Bring to a boil, reduce the temperature and continue cooking, whisking frequently, until the sauce thickens (about 5-6 minutes). Whisk in the blue cheese and 2 tablespoons of grated Parmesan cheese. Remove from the heat and cool slightly. Then whisk in the chives, egg yolks, salt and pepper.
3. Separately, whip the egg whites until stiff, but not dry. Fold them into the sauce mixture. Divide the mixture among the 8 ramekins. Pour enough boiling water to fill the ramekins halfway. Carefully place the baking dish into the oven and bake for 30-35 minutes or until the soufflés are puffed and golden brown.
4. Remove from the oven and place the ramekins on a cooling rack. Grease another baking dish large enough to hold the soufflés without touching. When they are cool enough to touch, gently run a knife around the edges of the soufflés. Gently drop the soufflés into the palm of your hand, then turn them upright and place them in the buttered baking dish with space in between.

Turn the oven up to 425° F (218° C).
Pour the cream over the tops of the soufflés and sprinkle with the remaining Parmesan cheese. Place in the oven and cook for 8-10 minutes or until the soufflés are puffed and golden brown.
Using a spatula, carefully transfer the soufflés to a plate and spoon some of the extra cream around them. Serve with a dollop of the quince compote.

Preparation for the quince compote:
1. In a medium saucepan, combine the sugar, water, Sauternes or white wine, vanilla bean and lemon peel. Stir over medium heat until the sugar dissolves and the mixture is boiling. Add the quince cubes, return to a boil, then reduce the flame to simmer and cook for about 30-40 minutes, or until the quince is tender and soft.
2. Transfer the cooked quince to a bowl using a slotted spoon or strainer and continue reducing the cooking liquid another 15 -20 minutes, or until it is thick. Stir in the salt and lemon juice. Pour over the quince. Cool to room temperature. Store the compote in the refrigerator in a closed container for up to three weeks.

These suggestions certainly get my mouth watering, and a cold crisp glass of Coutet alongside any of these culinary delights would only serve to enhance.