A Guide to Madeira Wine 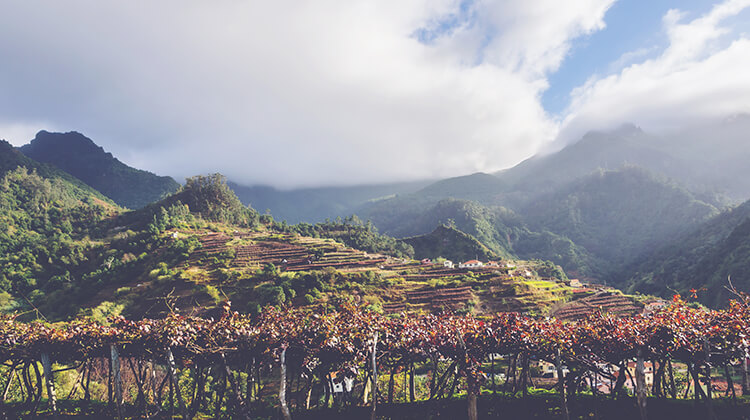 “I think Madeira and Burgundy carry combined intensity and complexity of vinous delights further than any other wines. There is possibly something unlawful about their rapture.” Prof. George Saintsbury, Notes on a Cellarbook (1920)

To all drinkers of Madeira, the very mention of the word sends shivers of anticipation and excitement down the spine. Madeira produces incredibly aromatic wines that perfectly balance richness, sweetness and astringency and display a spider’s web of complexity. As soon as a bottle is opened its intoxicating aromas flood the room and its searing acidity magnifies the flavours of what is arguably the world’s longest lived wine.

The Island of Madeira erupted from the Eastern Atlantic 14 million years ago and first discovered by Arab sailors voyaging from the Island’s closest land mass, Morocco, lying 365 miles away to the East. But it was not until the first Europeans set foot on the island in the 1400s that the first vineyards were planted, the first levadas ( an irrigation channel or aqueduct specific to the Portuguese Atlantic region of Madeira) dug and wine was made from vines brought from Europe and the Mediterranean.

Due to its perfect positioning in the Atlantic it sat directly en route for trade heading South to the Cape of Good Hope, to India and China or crossing the Atlantic to America and the West Indies.

In 1480 Christopher Columbus is said to have lived on the Island making maps and charts and at this time the first wine was probably an ordinary table wine, it was not however until the late 16th Century when the British arrived that organised trade really took off. By 1680, 26 firms, 10 of whom were British, were exporting wines to the British Colonies and Americas. In 1768 Captain James Cook called at Funchal on his way to the South Pacific in Endeavour and again in 1772 and took with him 3,000 gallons of wine which he gave to his crew; an allowance of 200 bottles per head for the two and a half year trip ahead to combat, to some degree, the ravages of scurvy. In 1784 Horatio Nelson placed an order on his way to the West Indies.

Indeed such was the need to stockpile for these lengthy journeys that the necessity to preserve the wine came about and fortification with brandy came into play documented as early as 1753. It was not much longer after this that greater risks at sea and continuing demand for Madeira brought about the advent of estufas (translated as stoves) to re-create similar effects on maturing their wines as were found by lengthy sea journeys albeit from the safety of the shore. Without doubt these two advents in the production of Madeira wine as we know it today, first fortification and then secondly estufagem changed the face of this most prized and treasured elixir.

The age of a Madeira is determined by the year that the estufagem process is stopped and from the mid 18th Century we start to see wines named after the grapes from which they were made and it was then that we entered into the golden age of Madeira. Shippers took a keener interest in the production and lodges were constructed to specialise in the fermenting, maturing, fining and racking. It was here that fortification took on another level of importance as not only did it make the wine stable for the long passages it also attributed to maintaining the sweetness levels of the noble varieties. The drier Sercial and Verdelho were allowed to ferment dry before the addition of brandy whereas Bual and Malmsey were required to retain their sugar levels and therefore brandy was added to arrest fermentation and retain their sweetness. The casks were stored in the lodges being affected by the sun’s natural heat and mirrored the heating process that was found in the ships hulls on their long passages. Over many years the fortified wine slowly oxidised and was moved down through the levels within the lodge until such time as it was decided to bottle and ready to enjoy.

In 1803 William Grant landed on the island swiftly followed in 1808 by William Cossart and then in 1811 John Blandy from Dorchester. The Golden era had begun and on 23rd August 1815 the ship the Northumberland dropped anchor and on board Napoleon on his way to exile. The wine we know today as Madeira was reaching its zenith and all accessible land was put to cultivation.

The most prolific variety on the island is the Tinta Negra Mole accounting for just over half of the island’s production and shows such dexterity as to mimic the four noble varieties and their characteristics ranging from bone dry to super rich. This flexibility lends itself favourably to blends and therefore perhaps why it has never reached the notoriety of the main four. This position is now being challenged and in the hands of a few producers we are able to enjoy some incredible examples of what this variety can deliver.

Sercial; the lightest in colour more akin to Amontillado than Fino has a nuttiness about it matched with searing acidity, locally often nicknamed the dog choker due to its astringency in youth. It takes the longest to ripen and therefore does take time to settle but with age (8-10 years) it is often considered one of the finest Madeiras showing a smokiness in maturity. It is the driest and often with that comes a great salinity from the Island’s fresh air.

Verdelho is often considered the most favoured by drinkers, as it is still an aperitif like Sercial yet with more aromatics. It pairs well with soups and is excellent with rich game pate. It shows itself a little more golden in colour and fullness and bridges perfectly from Sercial to Bual.

Bual also known as Boal (the Portuguese spelling) wonderfully balances richness, depth, fullness and its still searing acidity masks the sweetness. Certainly less sweet than Malvasia it has been known to partner curries and or a piece of chocolate of an evening. It is fruity and rich but never too much and therefore lends itself perfectly to a mid afternoon tipple as well as to accompany a good hard cheese - but leave the sticky toffee pudding for Malmsey.

Malmsey produces the sweetest wines of them all. Luscious, fragrant, full and lingers on the palate rewardingly. This demands a place at the table and sits comfortably alongside more famous dessert wines.

Terrantez of course deserves a mention and its existence has almost matched the changing fortunes of the Madeira trade as a whole over the last 150 years. In 1852 Oidium struck, a pest which had a particular impact on the low yielding Terrantez; roughly 80% of the vines perished almost immediately. Such was its absolute devastation that for all shippers production declined comprehensively from thousands of pipes shipped per year to just a handful. The American Civil War put the brakes on their largest export market and then phylloxera followed in 1872. It did not take long for less labour-intensive, more profitable crops to replace the vines and subsequently very little or no Terrantez was replanted due to its Pinot Noir-esque finickiness. By the 1920s the variety was as good as extinct and the Madeira market too had reduced irreversibly.

Jumping to more recent times, in 2004 the IVBAM (the Madeira regulatory body) stated that there was less than 1ha of Terrnatez planted on the entire island - smaller than the Romanee Conti vineyard. Happily this is slowly being remedied and production of this most magical grape is increasing albeit in tiny steps. There has always been a general agreement among Madeira wine experts and collectors that the Terrantez grape shows Madeira wine at its best. The unique spectrum of aromas, the fabulous ageing ability, the almost ethereal quality and the characteristic flavours have always made this grape a favourite of the experienced connoisseurs. Add the rarity of the grape and it is easy to understand why old Madeira wines made from Terrantez have been and always will be relatively hard to find.

We have championed Madeira wines for some time and we hope to excite more drinkers to this wonderful beverage. Whilst the trade continues to evolve and release new wines into the market we are determined to ensure bottles of Madeira are part of all our client’s cellars.