A Guide to Types of Sherry 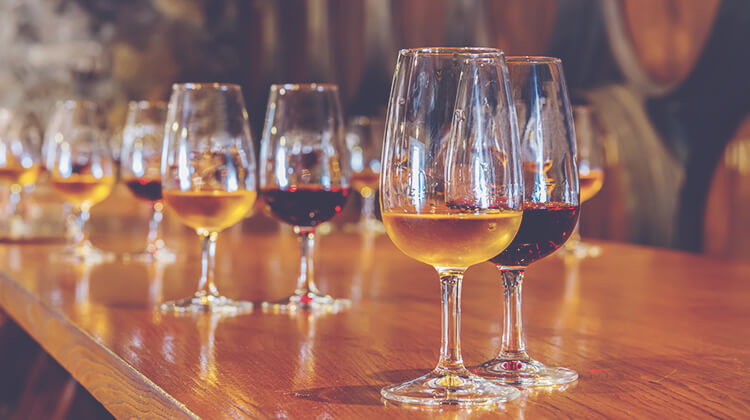 Once the drink of the everyman, today Sherry represents but a small niche in the world of fine wine. It is nothing short of a travesty that one of the world's finest wines is enjoyed by so few, especially when one considers what exceptional value for money it is. In recent years with improved marketing, greater regional tourism and the ascent of Spanish gastronomy, the fortunes of Sherry have improved a little but, for now at least, it remains very much an insider’s wine.

Excepting the sweet wines of Pedro Ximenez and Moscatel, essentially all Sherry come from the Palomino grape variety. Whilst it is a truism that no great wine can be fashioned from poor fruit, Sherry is a wine where the nuances of terroir and subtleties of viticulture matter less than for most. Palomino is a modest grape variety that generally produces serviceable if somewhat indistinct table wines. The magic of these wines comes through the unique vinification, blending and ageing processes.

The alchemy of sherry

Common to all is, following conventional vinification, a fortification with local brandy that takes the alcohol to 15.5% for the former group and 18% for the latter. This process serves to both stabilise the wine – an important consideration in the days of lengthy and unpredictable marine supply – and give the producers greater control over which style of wine is produced.

Next comes the stage that makes Sherry the unique product it is: Solera ageing. The key to Sherry is "fractional blending”, where wines age and are periodically extracted across age-sets to produce a complex and consistent product. A perpetual and complex process of withdrawals and topping-up that amongst quality producers goes on for decades. The word Solera is derived from the fact that the butts containing the oldest, finished wine are at floor ("suelo") level.

Those who have visited the great Bodegas of Jerez will have marvelled at the rows of dusty ‘botas’ will have noted the chalk markings on the giant barrels which denote the style of wine that the ageing wines will take. The choices are as follows:

Fino - A bright, yeasty wine with notes of fresh dough and almonds. With further ageing more savoury and complex characteristics emerge and the saline tank softens. Aged under the protective ‘flor’ for its entire ageing period it is transferred between barrels relatively frequently to maintain the health of the flor and prevent oxidation. Fino’s savoury quality and latent energy makes it the perfect companion to the assertive and diverse dishes of tapas.

Many bodegas today offer “En Rama” releases which are Finos with minimal filtration and thus retain more of the Solera character. Tiny is volume terms, they are however, a positive sign of Sherry’s recent willingness to innovate and adapt.

Manzanilla – Technically Manzanilla is simply fino aged in Sanlucar rather than Jerez or El Puerto. In practice however, this seemingly minor distinction is material as Sanluca is much closer to the coast where the climate is milder and more humid, conditions which the flor likes giving a stronger biological ageing. As a consequence, Manzanilla tends to be more lithe and racy with fino being fuller bodied and a little more rounded and serious.

Amontillado - Perhaps the most complex and elegant of the Sherries with characteristics and flexibility akin to table wine, it is often the favourite Sherry of connoisseurs and aficionados. Today the method generally employed is that aging a Fino or Manzanilla will under flor for between three to eight years before being fortified to around 17ᴼ which kills the flor and allows the wine to begin the oxidative phase of its ageing which will be developed in an Amontillado.

Paolo Cortado - Long considered an enigma, the mysterious transformation from Fino to Paolo Cortado made these Sherries something of a star turn. This most enigmatic style is the choice of many connoisseurs for its complexity, and comparative rarity. Formed when the Fino flor dies off allowing the sherry to develop a slightly fuller fatter style no longer suitable for Fino but definitely influenced by the flor it has a food friendly structure but can also be enjoyed alone.

Oloroso - The least flor influenced of the range these ‘fragrant’ (Oloroso is the translation) sherries are selected for their robustness before being fortified to 17-18 % and allowed to age oxidatively. With no flor to consume it there is a naturally high level of glycerine in the wine which makes it smooth and gives the impression of slight sweetness. It is amber to mahogany in colour due to the oxidation, dry, full bodied, smooth and structured with an open texture, and often has aromas of walnut, dried orange peel, cinnamon and leather. Oloroso is the very pinnacle of the oxidised style of wine. It was probably the principal type of wine known as “Sack” so beloved of the Elizabethans.

It is from Oloroso butts that the Scotch Whisky industry sources their ever-popular Shery-casks and has been a welcome, if slightly undignified, source of income to a depressed Sherry trade.

Pedro Ximenez - PX, as it is universally known, is one the sweetest and long-lived wines in the world. The concentration of sugars comes from the 4-10 days of post-harvest drying in the hot Andulsian sun the grapes receive which can see sugars treble as water evaporates. As the wine ages it becomes more concentrated particularly in relation to colour, acidity, sugar and dry extract levels, the latter two helping to provide the amazing texture of this wine. Glorious as a conclusion to a meal or as an addition to ice cream or even a mid-morning coffee!