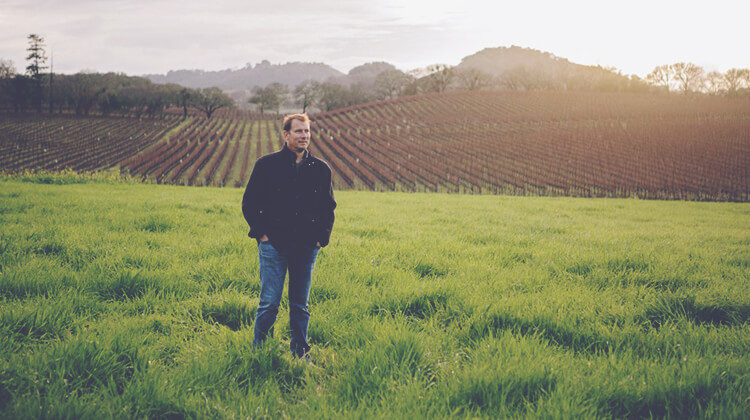 Stonestreet Estate Vineyards and Winery in the Alexander Valley stands as one of the most extensive mountain estates in the world and is a testament to the quality of high-elevation winegrowing in California. The Estate Cabernet Sauvignon, Stonestreet 2015 is in our Merchant's Collection. We sat down with Head Winemaker, Graham Weerts and discussed the history of Stonestreet.

Tell us about Stonestreet and how it came about?

Stonestreet Estate Vineyards was established in 1995 by Jess Jackson and Barbara Banke with the vision to “defy the limits of California winegrowing.” Discovering the 5,500-acre estate in Sonoma County’s Mayacamas mountains, they recognized its world-class potential and shared a fundamental belief that the wines were worthy of the global stage.

Jess Jackson’s vision for Stonestreet was of a 100-year threshold, rooted in respect for the land and a commitment to its long-term sustainability. He established the estate on the fundamental principle that every decision made in the present should benefit the next generation, and that tenet still holds true. “Stonestreet” was not only Jess Jackson’s middle name, but is shared by his son Christopher Jackson, as well as Christopher’s four sons. The family has shared in the beauty of the mountain for multiple generations, and its evolution intends to preserve that for the future.

What makes Stonestreet stand out compared to other wines?

Alexander Mountain Estate rises 730m above the Alexander Valley floor in Sonoma County. It’s one of the most diverse single estates in the world, and everything we do is centred around the land. Conceptually, it is not just a vineyard but an appellation, with some of the greatest sites on earth from a viticultural perspective.

From a winemaker’s point of view, there is nothing you can do to impose your will onto the fruit at Alexander Mountain Estate. The mountain makes its own wines and by default, everything we do in the vineyard – beginning with what we plant and how we plant – is guided by the place.

There is nowhere in the world with this level of complexity, power and scale. It is a place that viscerally impacts those who visit, and it is the expression of this land in the glass that makes it stand out by comparison.

Tell us about yourself/yourselves and your background? How did you come to create Stonestreet?

I always knew I wanted to work in farming and agriculture. I was raised in a farming family in Cape Town, South Africa, and my entire extended family are sheep farmers in the Eastern Cape. It was my brother and father who first introduced me to wine. Their influence, and the proximity to vines while growing up in South Africa, helped to sway the decision.

I went on to work harvests in South Africa and internationally, in Bordeaux and California, and was among the first South Africans to work internationally in Europe. The process of working abroad was significant in shaping my understanding of wine on a global scale.

My introduction to Jackson Family Wines was via Pierre Seillan, with whom I worked in Bordeaux and in Sonoma County at Vérité Winery in 1999. We kept in touch, and in 2003 I saw Jess Jackson and Barbara Banke at VinExpo. I was 29 years old and a senior winemaker at a major winery in South Africa, but they asked me to come meet with them in the United States and presented the winemaker position at Stonestreet Estate. That was in January 2004. I arrived in the US on a Saturday, and never turned back.


Tell us about your key influencers and where your inspiration comes from?

After college, I went to work in Bordeaux because a close friend of mine had ties to Pierre Seillan. It was the end of the apartheid year and virtually unheard of for South Africans to work in Europe. It was the first time I’d ever been overseas, and I stayed in Bordeaux to work for Pierre for six weeks. This was at a very formative point in my career, and it solidified working in wine completely and absolutely.

Certainly, Pierre has been an important influence in my career, beginning with my time in Bordeaux and continuing to my experience with him at Vérité in Sonoma County. Even today, my love for Bordeaux wines stems from this experience and its impact on me. The 1999 harvest with Pierre at Vérité was one of the best harvests of my life, and certainly the most influential.

I feel fortunate at Stonestreet to work with both Cabernet Sauvignon and Chardonnay at high elevation. These experiences around the world have shaped the lens, but certainly the inspiration comes from the land, the process of listening and coming to understand a place, and then translating that expression to the glass.

Tell us about your range and about Stonestreet. How many wines do you have and how are they different?

The range of wines at Stonestreet Estate Vineyards is centred around the Estate Cabernet Sauvignon and Estate Chardonnay, two flagship expressions of the mountain. At Stonestreet, the focus is unapologetically on the Estate wines which are comprised of components of the single vineyards to create a complete and harmonious expression of the mountain.

Beyond the Estate wines, we bottle single vineyard expressions that capture the singular personalities of individual blocks on the estate. These wines provide a lens to the variability and diversity of the mountain and play a supporting role as the component pieces of the Estate wines.

I tend towards red wines and the ways a fine red stimulates the mind. So, for me it is the Estate Cabernet Sauvignon, although it always depends on the occasion and mood.

The estate is parcelled into 290 individual single vineyard blocks, each with its own personality. This means we treat each parcel individually, and within these blocks each is farmed and harvested in stages. The variability on the mountain means that nothing is consistent, and so attention to detail in the vineyards is essential to making the wines at Stonestreet. Mountain winegrowing and the fruit it produces is vastly different from fruit grown on the valley floor. Its elevated concentration, pigmentation and tannin structure that form the backbone of ageworthiness.

One of the fundamental things to understand about Stonestreet is that it is impossible to manipulate the structure of wines. The essential structure is present in the fruit when it is picked and cannot be extracted in the winery, so the wines are inherently powerful – not in the sense of opulence, oak or alcohol – but in the structure that creates the impression of power.

The scale of the estate means it takes an immense amount of time to figure out what to do – how to approach each block and understand what it needs to yield its best expression. With a close team and nearly two decades of experience at the estate, we’ve been able to hone our approach to picking dates and fermentation techniques.

Combined with the ability to pick different vineyard sites at different times, the ability to ferment individual lots differently maximizes the potential expression of vineyard sites. We’ve invested in a range of diverse vessels and traded in some of the larger fermenters for smaller fermenters. This provides greater context for the viticulture, preserves the individuality of smaller lots, and provides a more focused lens to understanding the differences.

It is ultimately the process of blending different sites that yields the complexity of our Estate wines. Embracing a philosophy of “harmony through extremity,” balance in the wines is not about recalibrating the character of the fruit, but about allowing the extreme attributes to balance each other naturally. The diversity of the estate and the range of expressions it produces allows us to create an integrated expression of the mountain with layers of complexity.

How long did it take you to conceptualise and perfect the wine?

The variability of Alexander Mountain Estate’s dramatic landscape means winemaking is extreme. For a winemaker, it is a site that can never truly be mastered. The sheer number of possibilities is confounding, and each vintage presents its own set of challenges. Since 2004, I have been building on the knowledge of previous years and we have arrived at a pivotal moment in Stonestreet’s history through our understanding of the estate, and the application of the farming and winemaking practices. But the process is an ongoing educational experience, one that Jess Jackson knew, when he purchased the property in 1995, would be a 100-year undertaking.

Roughly 250,000 bottles across the full portfolio.