A Guide to Australian Wine 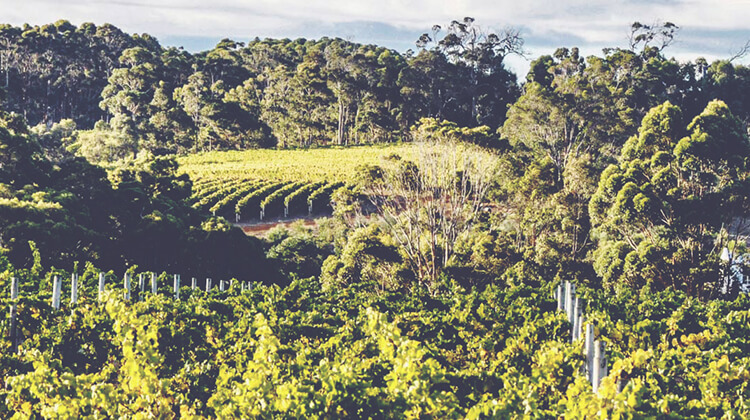 With a long and established wine-growing history, Australia is the world’s 6th largest wine producer earning its place among the most established of the New World wine-producing regions. The first settlers into Australia became involved in growing vines, with the produce being used for religious and medicinal purposes, their output was dominated by fortified wines for many decades. There was a boom in Australian wine in the mid 1980s and 1990s when huge volumes of easy-drinking Chardonnay and Shiraz were imported into the UK. These newly imported Australia wines were intensely ripe, easy to drink, not to mention the very friendly prices and they created a new legion of wine lovers. However as the years have gone by winegrowers have inevitably looked to quality rather than quantity, and the searing heat of the Australian sun has come to represent as much of a challenge as an opportunity. Therefore increasing numbers of growers are looking to cooler climates, either by seeking higher altitude or heading to ever more extreme coastal and even island regions. The change in Australian wine growing has been dramatic and now the very best Australian wines are characterised as much by freshness, vibrancy and precision as they are the sunshine.

Most of the vineyards are located in the South of Australia, the wine state in Australia, responsible for almost half of the annual production.

Australia’s reputation still leans towards the production of world-class reds. The finest Bordeaux-style Cabernets come from the cool climates and in Australia the area which serves this style is the famous strip of Terra Rossa of Coonawarra in South Australia Limestone Coast Zone as well as Margaret River. The best Bordeaux style wines from Australia combine elegance and power with blackcurrant, earth and spicy characters; and can age gracefully for decades.

Secondly, Shiraz from the Barossa Zone, home to the famous Penfolds Vineyard. The Barossa Valley floor is one of the most famous regions of Australia, known for the dry farmed and bush trained plantings. The wines typically taste of plum, cherry and blackberry flavours with savoury tannins. The cooler Eden Valley and the surrounding hills make more spicy and elegant wines.

An alternative from the fuller reds made from Shiraz and Cabernet Sauvignon, Australian making has branched out to Pinot Noir grown in the Yarra Valley (North East of Melbourne) and more coastal regions of Victoria. These areas enjoy a range of climatic conditions all cooler than those of Bordeaux, thanks to the elevation and maritime influence. The Australian Pinot Noir is typically light-coloured, has a perfumed nose and shows red fruit such as cherry, raspberry and plum flavours balanced by smooth tannins. The best examples age well and develop complex truffle, game and earthy characters.

Moving onto the Australian whites, there is an abundance of stunning white wine varieties coming from Australia. Notably from the valleys of Clare and Eden in South Australia, which are best known for their crisp, intense and age-worthy Rieslings. The continental climate of Clare Valley, North West of the Barossa Valley has warm days but cool to cold nights in summer, producing outstanding yet steely wines that take the aroma of lightly browned toast with a twist of lime as it ages.

The immortal Hunter Valley Semillon - grown in the north of Sydney, the climate here is abnormally hot for a fine wine district, although the heat is partially offset by high humidity, by afternoon cloud cover and by substantial rainfall during the growing season. These wines are famous for their capacity to age, evolving through an array of lemon flavours, eventually becoming richer and developing complex toasty and honeyed characters.

The Burgundy-inspired cool-climate Chardonnays are grown the length of the South coast and there is a diversity of styles which would have been unthinkable just a few decades ago.