Chilean wine is as unique as the country’s geography. A long, thin country spanning nearly 3000 miles from North to South but just over 60 miles across, it is hemmed in by the Pacific Ocean in the West and Andes mountains to the East. This means that the climate varies considerably. In the central valley of Chile, nestled at the foot of the Andes, it is almost Mediterranean but as you move further towards the coast the climate becomes much cooler. The combination of plentiful sunshine, moist coastal fog and cool valley breezes makes for ideal wine making conditions and also means a wide variety of grapes can be grown here.

Chilean Cabernet Sauvignon is amongst the most coveted in the world outside of France, with the Colchagua Valley producing some of the country’s finest red wines. Cabernet Sauvignon, Carmenère, Malbec and Merlot dominate the vineyards of the warmer East, whereas the cooler West closer to the ocean favours white Chardonnay and Sauvignon Blanc varieties. Chilean red wine’s most historic growing region is the Maipo Valley. Often dubbed the Bordeaux of South America, its rich and fruity Cabernet Sauvignon is celebrated the world over. It is separated from neighbouring Argentina by the dramatically jagged Andes mountains.

Estates such as Las Pizarras, owned by Eduardo Chadwick of Errazuriz fame, are responsible for some of the finest Pinot Noir and Chardonnay wines in Chile, the former displaying rich spice, dark fruits and earthy chocolate qualities. Chilean Chardonnay is comparable to the boldest Californian examples, owing to their similar climates. Complex flavours of melon, honey and apple combine with a hint of cream in typical Chilean Chardonnay and it has a slightly fresher nature than its North American counterparts. Eduardo Chadwick’s Sena wines are amongst the highest rated Chilean red wines and are a shining example of the country’s wine capabilities as a whole, thanks to a whole host of factors including its blend of six different grape varieties. 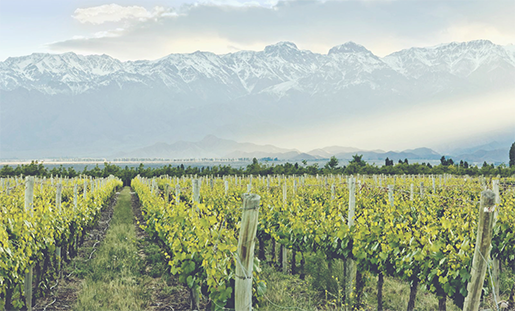